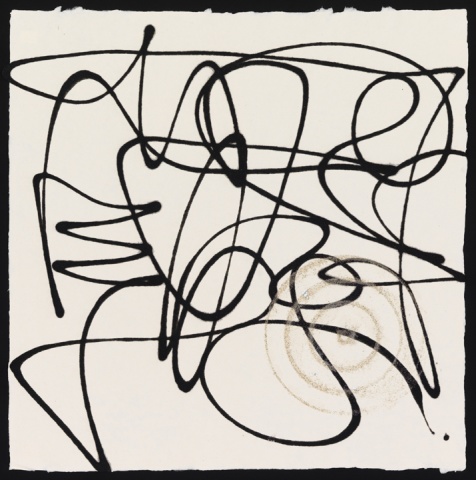 Through my investigation into the concept and process of handwriting I became intrigued with the ability to communicate beyond the message encoded in the text. Handwriting is a visual language emanating from our thoughts and emotions, a remnant of a process. Each line, each stroke, is distinguished by the materials, the mood, the day, the rhythm, the breath—a visual language within a language, a cross between a fingerprint and an EKG, telling not only who we are but also how we are in that moment of time. My intrigue lies not only with line and space but heartbeat and breath—and resonance, that energetic quality, that vibration that seems so illusive.

My mark making began as an abstraction of handwriting, intuitive movements, with particular attention to the rhythm and mood, referencing response to my environment. As I develop a new body of work I feel myself drawn to nature—time that I spend not necessarily seeking or looking but simply being—and then seeing—the lines, the stories, the visual language. The rolling cornfields blanketed with snow suddenly appear as text—the smooth sand along the shoreline tufted by tiny stones emerge as musical scores inscribed with calligraphic lines of remembrance. I see before me that meaning—language embodied in the “mark”.

When I began papermaking years ago it was for the purpose of examining and exploring the creative process from inception to completion. From the formation of sheets, to working with fibers in its various degrees, I was led to create spontaneous marks within the pulp. The medium became an art unto itself and now offers a multidisciplinary approach in my exploration of capturing sound/resonance in paper with cymatics—sound wave phenomena.

Watching cymatics occur before my eyes, as the sand on the metal plate vibrated from seemingly utter chaos to a mandala like form, the synapses in my brain snapped and I began to actually physically see how sound/vibration effects form and matter. With frequency changes—chaos, then another form reminiscent of sacred geometry. It seems synchronistic that this physics experiment originally developed by drawing a violin bow across a metal plate so many years ago provides a bridge for me now—a perception and greater awareness of the relationship of vibration, sound, and the harmonic connection to charkas, subtle bodies, and sacred geometry. Science and art merge. The visual beauty of the geometric patterns portraying the responsiveness of matter to sound, illuminate the poetic and philosophical principles of nature. My artwork, my life—informed and inspired by both the inner and outer landscape.